"EACH DISCOVERY REVEALS A NEW DIMENSION TO YOUR LEGACY"

THE UNFOLDING JOURNEY is a new blog written in association with Legacy Genealogy.

This blog is a blend of disciplines that reveal the rich texture of culture and history that surrounded your ancestors' lives, as well as your own. We will take you beyond just the names, dates, and places to give you the "back story" for the reasons your ancestors thought what they thought and did what they did. We invite you to also visit us at the Legacy Genealogy facebook page at http://facebook.com/legacygenealogy 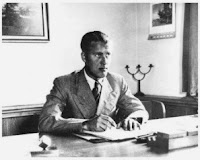 After the Nazi Party was elected to power in Germany, rocketry almost immediately became a national agenda. A young Wernher von Braun was awarded a doctorate in Physics in 1934, and was immediately given a government grant to develop a new solid-fuel rocket (his doctorial thesis was kept classified by the German Army until after World War II). Civilian rocket research was forbidden by the Nazi regime. Only military development was allowed.
A new rocket research site was built at Peenemunde in northern Germany on the Baltic Sea. General Dornberger became military commander at Peenemunde, von Braun was technical director. In collaboration with the Luftwaffe, they developed rocket engines for aircraft with jet-assisted takeoffs.
Von Braun joined the Waffen SS (the military wing of the Nazi Party) and became an officer in 1940, lasting until the end of the war. Later, von Braun said, “I was officially demanded to join the National Socialist Party. My refusal to join the party would have meant that I would have to abandon the work of my life. Therefore, I decided to join. My membership in the party did not involve any political activities.”
This claim was widely disputed. He was promoted three times by Reichsfuhrer Heinrich Himmler, eventually becoming a major in the SS.
Nazi’s and Concentration Camp Laborers 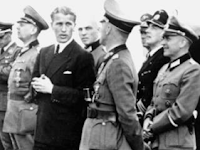 In December, 1942, Adolf Hitler signed the order approving the production of the A-4 “vengeance weapon” and the Peenemunde group developed it to target London. Eight month later, British intelligence, having learned of the rocket program and von Braun’s team, had the RAF raid the Peenemunde facility site with 596 aircraft dropping 1,800 tons of explosives on it. The site was salvaged, though, and most of the rocket team remained unharmed.

SS General Hans Kammler had a reputation for brutality. He originated the idea of using concentration camp prisoners as slave laborers in the rocket program. The Peenemunde engineers endorsed this idea when a labor shortage developed there in 1943.
Von Braun admitted visiting the plant at Mittelwerk on many occasions, where prisoners were used, but claimed to never have witnessed any deaths or beatings; although it had become clear to him that deaths had occurred. He denied ever having visited the Mittelbrau concentration camp, where 20,000 had died, but many witnesses saw him there and testified that he personally selected some prisoners, with the appropriate skills, to work at Peenemunde. Also, in 1944, von Braun admitted that he picked labor slaves from the Buchenwald concentration camp, and, 25 years later in an interview, admitted that they had been in pitiful shape. He was reported to have said, “My spontaneous reaction was to talk to one of the SS guards, only to be told with unmistakable harshness that I should mind my own business, or find myself in the same stripped fatigues! I realized that any attempt of reasoning on humane grounds would be utterly futile.”

Again, this claim has been widely disputed. Others claim that von Braun engaged in brutal treatment or approved of it. French prisoners testified that von Braun stood by and watched as prisoners were hung by chains from hoists. Von Braun claimed, “(I) never saw any kind of abuse or killing,” and had only, “heard rumors that some prisoners had been hung in the underground galleries.”
It is believed that more people died building the V-2 rockets than were killed by it as a weapon.
The V-2 “Vengeance Weapon” 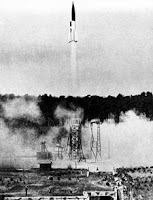 The A-4 was renamed the V-2 and began to be launched toward England in 1944.
The V-2 was one of the most astounding weapons of World War II. A pure terror weapon and the first long range ballistic missile used in combat, it hurled a one ton warhead 50 miles high and hundreds of miles down range to its target. No defense existed, once a V-2 was launched. The V-2 is the second most expensive and technically demanding of all weapon projects of the war, eclipsed only by the “Manhattan Project,” the American atomic bomb program. Professor von Braun and his team delivered the V-2 “vengeance weapon” to Hitler in 1944. An estimated 16,000 Londoners were killed by V-2 rockets.

Movement to Austria
In early 1945, the V-2 test site and manufacturing facility at Peenemunde was again within range of British bombers. As Hitler’s Third Reich was crumbling, von Braun made plans to move his team of 125 of the world’s leading rocket scientists and engineers southward into Austria. They planned to surrender to the Americans rather than succumb to capture by their mortal enemies the Russians. He organized a mass exodus from Peenemunde.
An SS spy reported his intentions to Himmler. As a result, Wernher von Braun was detained by the SS and moved to a Gestapo jail in Poland where he was imprisoned for two weeks. Albert Speer, Reichsminister for War Production, convinced Hitler to reinstate von Braun so that the V-2 program could continue. Unknown to von Braun, Hitler had secretly ordered their execution if they attempted to surrender or were in danger of capture by the Allies.
In fear that their research documents might be destroyed by the SS, von Braun ordered the blueprints to be hidden in an abandoned mine shaft in the Hardt Mountain Range. The team moved into the town of Oberammergau in the Bavarian Alps, then on to Austria. After a dangerous, intrigue filled journey and now secure in Austria, they waited for the American arrival.
Surrender to the U.S. Seventh Army

As the Seventh Army drew near, Wernher’s brother Magnus von Braun, himself a rocket engineer, bicycled out to meet them. The first soldier he met was Pfc. Frederick Schneikert of the 44th Infantry Division (VI Corps). Magnus was ordered to drop the bicycle and surrender with hands up. In poor English, he tried to explain his mission. He announced that the inventor of the V-2 rocket was a few hundred yards away – and wanted to come through the lines and surrender. The young soldier was not really sure what to think of his claims. “I think you’re nuts,” he told Magnus, “but we’ll investigate.”
There followed a hectic night interrogation, of proposals and counter-proposals. Finally, Magnus went out and in a short time returned with his brother Wernher, Maj. Gen. Walther Dornberger of the German General Staff, and a dozen German scientists. The 44th Infantry Division of the Seventh Army accepts the surrender of Professor Wernher von Braun and his staff of rocket engineers in Austria on May 2, 1945. Later it was confirmed that these men had been the key personnel at the German research center at Peenemunde. The American soldiers were not impressed, and their distinguished guests were soon cooling their heels in the POW enclosure.
After the surrender, von Braun was allowed to speak to the press. He said, “We knew that we had created a new means of warfare, and the question as to what nation, to what victorious nation we were willing to entrust this brainchild of ours was a moral decision more than anything else. We wanted to see the world spared another conflict such as Germany had just been through, and we felt that only by surrendering such a weapon to people who are guided by the Bible could such an assurance to the world be best secured.”
The next day, the group was evacuated to a small town in the American zone. Had the Soviets captured von Braun instead, the post war world might have been far different.
Relocated to the United States
In June, 1945, the Secretary of State approved the transfer of von Braun and his specialists to America (it was not announced to the public for four more months). The transfer was part of Operation Paperclip which resulted in the employment of many German scientists by the U.S. Army. In addition, it took 15 American cargo ships to carry the procured German rocket ordinance and equipment to the U.S.
The group first went to the Aberdeen Proving Grounds, in Maryland, to sort out the Peenemunde documents; then on to Fort Bliss, Texas, where they trained U.S. military and industrial personnel in the intricacies of rockets and guided missiles. A number of V-2s had been shipped from Germany to White Sands, New Mexico, where they were refurbished, assembled, and launched.
In 1950, at the start of the Korean War, von Braun and his group were transferred to Huntsville, Alabama. They led the Army’s rocket development team, resulting in the Redstone rocket, which was used for the first live nuclear missile tests. The team next developed the Jupiter-C rocket which launched the first U.S. satellite in 1958. This was the birth of America’s space program. At this time, von Braun also worked out the preliminary concepts for a manned Mars mission.
The Soviet Union Challenge in Space
With the launch of Sputnik I in 1957, there was a growing perception that America was lagging behind the Soviet Union in the emerging space race.

In April 1961, a big blow to American pride, and a shock to American security, came when the Russians put their first cosmonaut, Yuri Gagarin, into orbit in a capsule weighing over five tons. Space exploration and manned spacecraft would require larger payloads, which required larger rockets. Re-enter the German engineers. The U.S. leaders realized that the best talent for developing larger rockets was the team at the Redstone Arsenal, led by Wernher von Braun.
A month later, President Kennedy put forth the goal of “landing a man on the moon and returning him safely to the Earth, before the end of the decade.” Von Braun’s team was transferred from the U.S. Army to the newly formed NASA Space Flight Center.
The Apollo Program 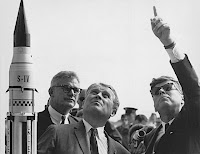 The first major program was the development of the Saturn rockets that could carry a heavy payload into and beyond Earth orbit. von Braun and his engineers developed rockets for both the Mercury and Gemini Programs.
Based on that, the Apollo program for the manned Moon flights was developed. Wernher von Braun’s dream for mankind to set foot on the Moon was realized on July 16, 1969, when his Saturn V rocket launched the crew of Apollo 11 on its historic eight-day mission. Saturn V rockets allowed five more teams of astronauts to reach the Moon’s surface.

In 1970, von Braun was assigned as NASA’s Associate Administrator for Planning. After a series of conflicts over the ending of the Apollo program, and facing severe budget cuts, he retired from NASA in 1972. He was frustrated to see popular support for the continued presence of man in space wane, once the goal to reach the Moon had been accomplished.
On June 16, 1977, Wernher von Braun died of pancreatic cancer in Alexandria, Virginia, at the age of 65. He is buried in Virginia.
Baron Wernher Magnus Maximillian von Braun:
Charming? . . . always,
Apolitical? . . . maybe,
Driven? . . . yes, to a fault,
Great scientist? . . .  certainly,
Nazi SS Officer? . . .  definitely,
American hero? . . .  of course.

If it seems that I have been a little too critical of Wernher, it’s OK. He’s family. He is my 8th cousin on my mother’s side. It’s a small world indeed.
Posted by Robert Thomas at 9:58 PM 5 comments: