"EACH DISCOVERY REVEALS A NEW DIMENSION TO YOUR LEGACY"

THE UNFOLDING JOURNEY is a new blog written in association with Legacy Genealogy.

This blog is a blend of disciplines that reveal the rich texture of culture and history that surrounded your ancestors' lives, as well as your own. We will take you beyond just the names, dates, and places to give you the "back story" for the reasons your ancestors thought what they thought and did what they did. We invite you to also visit us at the Legacy Genealogy facebook page at http://facebook.com/legacygenealogy

Rainy Nights in Tennessee. Beginning of the Corinth Campaign.

“The division, with other forces, all under Gen. Sherman, made reconnaissance toward Corinth, in search of the enemy. A few miles out our advance overtook the rear-guard of the enemy, and some skirmishing ensued, but the forces engaged were mostly cavalry. Our brigade was formed in a hollow square, so that we could be prepared for a dash (charge) in either direction. The ground on which we were maneuvering was densely covered with trees, and in some places it was difficult for us to distinguish between friend and foe at a distance of fifty yards. 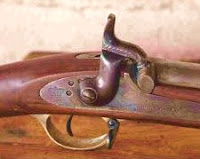 “During our reconnaissance we passed a rebel hospital, which was filled with their wounded. Nearby were great heaps of cooking utensils, which they had abandoned, and guns of every pattern lay scattered around. A rebel rifle, much the same in style as our Springfield rifles, bearing on the lock-plate the inscription, “C.S., Richmond, Va.,” was found by the writer. This gun I regarded as something of a trophy, and carried it several miles with the one I already had. When in camp, I took great pains to keep it in good order.

“No fears were now entertained of an attack, and the men were ordered to break ranks and make themselves as comfortable as the circumstances would permit. In a short time it commenced raining, when we were called up and ordered to ‘invert arms’. It was now quite sixty hours since we had slept, and some, from sheer exhaustion, lay down to sleep in the cold rain. Resting our faces upon our hands, we huddled close together on the log, and by that means managed to nod and keep one side warm. When sufficiently roasted and steamed on the side next to the fire, some one of the party would give to signal to turn, and we would then rouse up, face about, and resume our position on the log.

“There were thousands of men in the field who were in a destitute condition. Many methods were resorted to, to improvise rude shelters to protect us from the rain and wind. The bark of trees, logs, poles, brush, old straw or hay, and indeed everything that could be of ant service was appropriated in some way. In passing up a road we accidently found a new Fremont tent, which had fallen off some wagon and rolled out into the brush at the roadside. We soon discovered that when unfolded it would be large enough to lie on and cover both of us, and without further ceremony we ‘turned in.’

“During the night of the 22nd, one of the men belonging to our company died in his tent, and when morning came he was cold and lifeless. Even his bed-fellow did not know when he died. He was afflicted with heart disease, and had been unwell for several days. We were ordered to march immediately after breakfast, and a small party was left behind to pay the last debt of respect to a deceased comrade. A rude coffin was constructed of cracker boxes, and in that he was consigned to his lonely grave. His name was John H. Rinker.
“After the capture of Island No. 10, the forces commanded by Gen. Pope were conveyed on transports to Hamburg Landing, and were now moving toward Corinth. The entire army was now commanded by Gen. Halleck, and preparations were constantly going on for active operations against the enemy.”
(Middle Tennessee, April, 1862)
Excerpts taken from “Annals of the Fifty-Seventh Regiment, Indiana Volunteer Infantry: Marches, Battles, and Incidents of Army Life” written by Asbury L. Kerwood immediately after the war.
Posted by Robert Thomas at 4:07 PM No comments: